Hello lovelies! Normally I start these #fridayguestinterviews out with a big intro but my guest today does such an amazing job telling his story that I’m just going to let him do his thing with minimal interruptions from yours truly.

Gregor:
If you’re reading this you’re likely fairly young, and to you, at 39, I could like totally be your dad, but, as they say, age is just a number, and love knows no age, and I’m here to tell you that I learned both of these things first-hand from this incredible woman I’m a few seconds away from telling you about.

My name, should it matter, is Gregor Collins, and my formative years went like this: I was born in San Jose, California, moved to the Washington, DC area when I was ten, went to Chevy Chase Elementary in Maryland, Centreville High school in Virginia, attended freshman year of college at Ohio Wesleyan, sophomore year at Miami of Ohio, and Junior and Senior year at Florida State University.

Yep, even as a young man I was never afraid to face the unknown.

So this is how this went: During my senior year at FSU I met a professor in the media production department who I told I had ZERO clue what I wanted to do after I graduated. To that he responded: “I went to school with the creators of a new reality TV pilot called Blind Date, and I can get you an interview in Los Angeles.” I’m not even sure he got to finish his sentence, because I was already out the door. I packed everything I owned into my green Geo Storm, had $1,000 to my name, and drove the 40 West through this stunningly beautiful country to The City of Angels, knowing ONE single person in the entire state of California—some guy named Greg Normart who was supposed to interview me.

Well I got the job, I started as a Tape Librarian, I got promoted to a Segment Producer, and ended up venturing off and working as a freelance reality TV producer for a good while. After about four years in reality I decided to enter the world of fantasy: I stumbled into an acting class, and found it was something for which I had natural talent. Who would have thought? I did some television, and launched a couple indie features in which I acted and produced. And then, in 2008, I met Holocaust refugee Maria Altmann. That’s when it got really, really interesting, and by interesting I mean magical and life-altering and (insert hyperbolic adjective here.) 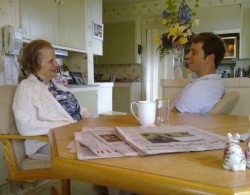 Now this is how this went: My friend Tom had answered an ad on Craigslist in late 2007 for a caregiver to a woman named Maria, and he got the job and moved into her house. He would brag to me about her any chance he got: “You just have to come to the house and meet this woman. She’s amazing.” I blew him off for a while, I mean, I was an actor, not some bored old-person-visitor, right, but apparently Tom didn’t get the memo. After a few weeks Tom gives me new news: They needed another caregiver, and he said I was the only one he thought of for it. Great. Thanks. I’m so glad you think that highly of me, Tom.

Well it got to the point that I felt guilty about blowing him off any more, because, after all, I’m a good friend, and, sure, I needed the consistent money, as acting has more financial ups and downs than a Vegas gambler. So I decided to go to the house to meet this “amazing” woman. Well, in that kitchen on that morning, my life pretty much changed forever. Fast-forward about 37 months, Maria had just died, and there I was sitting in front of my computer, crying my eyes out as I typed. Robert Frost said “No tears in the writer, no tears in the reader.” I always thought that if that concept Frost put forward doesn’t come naturally to a writer, one simply cannot call themselves a writer. I think part of the reason The Accidental Caregiver has been inspiring to people, is because I laughed and I bawled as I wrote it. 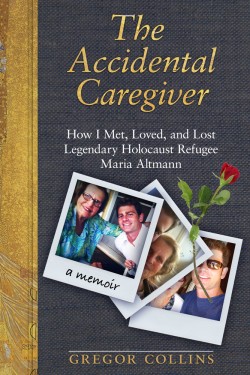 I started out on the publishing journey stuck on the old way of doing things, stuck on everything you should never be stuck on as a true artist—I want this to be HUGE, and I want the BIGGEST agent in the world, and I want the BIGGEST publisher on the planet, and I’m going to be famous! It’s only human to think big and to want to have the world accept you and think you’re great. But I quickly realized that this was such a deeply personal story to me, and my motivation was less about my own career and more about sharing with the world the most remarkable woman I had ever met, and to show them that someone like this—someone I’ve described as a cross between Mary Poppins and Julia Child—wasn’t just a character out of a novel. She actually existed! So I self-published. Very, very proudly. And I was fully prepared that the only readers of it would be her family and some of my friends. That would have been okay with me. What I really wanted was to at the end of my life be able to say I put it out into the world with my own hands, and that Maria was up there looking down on me fondly for it.

To my surprise I soon found that the reach was much bigger than the family, and my time with Maria resonated with a lot of people around the world. Looking back I wouldn’t have published any other way. That the buck starts and stops with me on a story that in many ways makes me the man I am today is a very, very, satisfying and life-affirming feeling.

In my eyes if a story is profoundly personal to you (which most of them should be), and you’re savvy on social media and have a certain charm and decorum while conducting your online activity—and you have that take-no-prisoners drive to succeed—you should definitely consider self-publishing, because aside from it being creatively rewarding in so many ways, more money goes into your pocket than going with the traditional route, unless of course you write the next Hunger Games or something, which I hope you do. Also, if you decide to self-publish, that doesn’t mean you’re in “self-publishing jail” for the rest of your life—a publishing company down the road could decide to acquire it. And at that point you have a tremendous amount of leverage and can decide if that’s something you really want to do.

I was a fervent, devoted actor when I met Maria. Nothing was ever going to stop me from being a working actor. But she had such a deep and immediate effect on me—and I on her—that I decided to put my selfish desires aside to care for her. And that’s the journey of the story, and why I think it lingers with people, the universal themes at work: Learning how to truly love, the power of self-reflection and self-worth, discovering what we really want and why we’re here, what it really means to be a success, etc. When I realized that I was really touching this woman’s heart and in many ways giving her a reason to live, I realized I was right where I was supposed to be in life. No amount of fame or riches would ever again lure me away from her.

The hardest part of this journey has been that I naturally think big, and I naturally want big things for everything I do, the book included. I’ve accomplished some cool things with it, like driving it to a bestseller on Amazon, adapting it into a play that debuted in New York, and working on getting the movie in development this year, but I’m such an impatient, unreasonable person that I want everything to happen RIGHT NOW. It’s been a real lesson in patience!

But I also believe “good things comes to those who wait” is only half-true. You have to find that space somewhere in between being patient and taking no prisoners. That’s one thing I wish I had more of when I started this journey with the book: the inspiration to take it in my own hands earlier. In the beginning I was still stuck in the old model of waiting for someone to give me permission to do it. Let me tell you, in this life, no one—not an agent, not a publisher, not the President of the United States—will ever inspire more self-worth in you than what you already have inside you. I don’t know why but I just thought of this tweet I posted the other day: “Way down deep beneath your thoughts and feelings is absolute and everlasting peace and tranquility in its purest form.” #MondayMotivation

My advice to people thinking about writing a book is to just sit down and write it. Ignore the naysayers, be bigger than your reasons, and force yourself to vomit it out. Your first draft will be horrible but believe it nor not most writers I know don’t even write! They sit and they dream about going on a famous talk show and talking about it, but they’re not actually willing to sit down and do the work it takes to get on that talk show. The only way to be a better writer is to keep writing. And to keep living.

Laugh, love, don’t take things for granted, be curious about everything, surround yourself with positive, idealistic people (and cherish those who keep you brutally honest), and most importantly… Follow. Your. Heart.

The Writing Piazza:
I know this has been different from all the other interviews I’ve done but I just couldn’t help it. Gregor your story is so consuming that it just has to be told all at once without any interruptions. Thank you so much for sharing it with us today and of course for having the courage to write such a personal story down and share it with the world.

If you would like to purchase a copy of Gregor’s best-selling book you can do so here:

If you’d like to see a teaser for the book you can check it out here: https://www.youtube.com/watch?v=JSCXfw7l9yQ

If they’d like to connect with you Gregor, is there a way they could do that?

Gregor:
I love to meet new, inspiring people. Find me on Twitter @GregorCollins or email me at gregorcollins@gmail.com.

The Writing Piazza:
Excellent. Thank you again for being a guest here on The Writing Piazza. And thank you all you wonderful visitors, friends, and family for reading this interview. I hope you found it as interesting as I did!